The joke goes like this: A guy jumps off the top of the Empire State Building. A woman in a 74th floor apartment has her window open. As the jumper plummets by, she hears him remark, “So far, so good.”

I thought of this joke recently, when the US economy improved and the unemployment rate fell below 8% for the first time in Obama’s presidency, forcing Governor Romney to abandon his favorite attack—that Obama’s unemployment rate had never been below 8%—and pivot to saying the rate was now the same as when Obama was sworn in, so there’d been no progress.

That struck me—a businessman—as most dishonest.

To illustrate this, let’s return to our New York jumper. If, as he’s passing the 74th floor, you take a photo, you see a guy at the 74th floor. But if you’ve been running a movie camera since he jumped, you see a guy in free fall. That’s why the overheard comment—“so far, so good”—is funny. You know it won’t be “so good” for long.

In the year before President Obama was sworn in, national employment fell from 95% to 92.2% (5% to 7.8% unemployment). During the next nine months it continued to fall, then stopped and gradually climbed to the level it was when Obama began (see chart below)—at which point Romney declared there’d been zero progress. 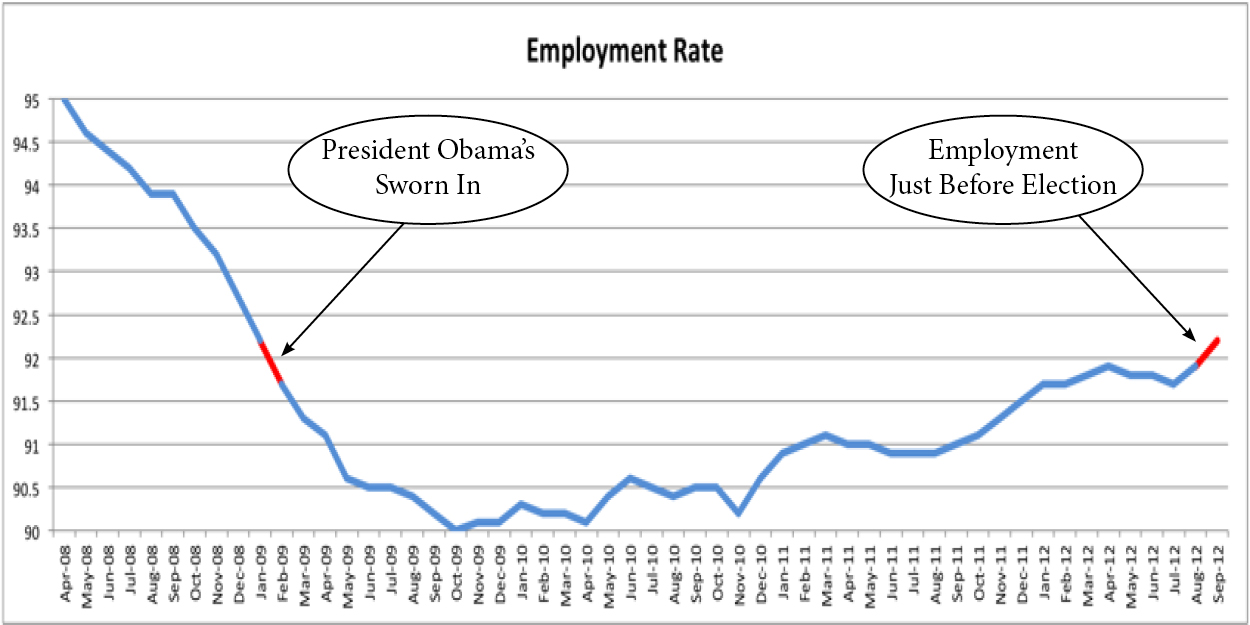 This, coming from a man who’d been spectacularly successful buying and selling businesses, seemed to me the height of disingenuousness.

He was comparing the snapshots, ignoring the movies, and hoping no one noticed. The snapshots were identical. The movies were quite different. The same employment numbers, but two very different trends—a free fall versus a steady climb. Mitt Romney would have been thrilled to buy the first economy and sell the second.

All candidates tell lies to get elected. I understand. It’s part of the game. But there are lies and there are lies. Mr. Romney’s strength—the thing about him I valued most—was his business acumen, and for him to pretend to misunderstand that … that was the lie that cost him my trust and caused me to vote to give Obama the chance to finish what he started.

Thank you for viewing my blog. Please return often. I value your comments.

Last night the American people elected President Obama to a second term. I watched on CNN, until I fell asleep waiting for Florida. When I awoke this morning, Florida was still undecided, but it no longer mattered.

Today, Barry Eisler, a novelist I follow on Twitter, retweeted an @froomkin tweet with a link to a blog by Eric Boehlert, Senior Fellow for Media Matters. Here’s the link: http://bit.ly/TuhXjb

Boehlert discusses pundits who got it wrong, who “misread the campaign through partisan eyes.” He writes, “It was fascinating to watch because these claims were supported by nothing but blind faith, as well as the far-right’s signature hatred of the president and a conspiratorial view of the media.”

“It didn’t work out that way,” Boehlert concludes.

I’m reminded of the following passage from Chapter Five of my book, Tom Henry: Confession of a Killer. This is a scene that took place in a prison cell in 1985. I’ve just suggested that it’s time for Tom Henry to start dictating his story.

“Which reminds me,” Tom Henry said. “You know who I saw the other day?”

“Well, what reminded me is this guy was examined by psychiatrists.”

“John Wayne Gacy himself. He was in chains and four guards were taking him from Death Row to the medical building.”

“Now there’s a psychiatric session where I’d have loved to be a fly on the wall.”

“I’m sure he talked about his childhood,” Tom Henry said.

“This guy had sex with young men, tortured them in this attic, killed them, buried them in his crawl space, and they have to examine him to see if he was sane?” I shook my head. “What I’d like to see them do is interview a hundred normal guys, then predict which one is going to go nuts. They get that right, they’ve got my respect. Like those talking heads on TV. The stock market dives and the next day they tell you why. Where were they the day before?”

I wasn’t thinking about political pundits back there in that prison cell in 1985, but I could have been. So tonight, 27 years later, for the first time in … well, since I can recall, I’ll watch Fox news, just to hear these same pundits explain why the American people committed mass insanity and voted more four more years of the same.

It ought to be entertaining.