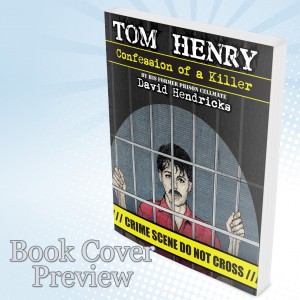 Yesterday I published a book on Amazon. Tom Henry: Confession of a Killer. So I guess that makes me a writer. But really, I’m a businessman. Anyway, as a new writer, I made a discovery the other day, when I went to an Orlando diner and ordered eggs Benedict.

“Good choice,” the waitress said as she scribbled on her order pad. “And to drink?”

“Coffee, black.” I opened my Kindle Fire to read.

“Yeah, but this time it’s my own book.” I grinned at her. “I’m doing the final proofreading on my Kindle to catch any formatting problems.”

“Don’t get too carried away. First let’s see if anyone wants to read my book.”

“Well, it’s going to be an ebook,” I said. “You can read the first five chapters free on my website, but then you’ll have to buy the book to read the rest. As soon as you do, it downloads to your phone or tablet—or computer.”

“I don’t want to read a book on my phone or computer. Aren’t you going to have a printed book?”

“Yeah, but that’ll be a month from now. It’ll be POD—print on demand—so you’ll still have to order it online. It won’t be in bookstores.”

“Well, I’ll just wait. When it gets printed, bring me in a copy—and I want it signed. Wow, I know an actual author!” And she skipped away, happy as could be.

Nothing abnormal about that, right? Well, suppose you meet a friend you haven’t seen for a while.

“Hey! How are you?” you say. “You still doing engineering?”

“Cool,” you say.  “Let’s get together for a cup of coffee sometime and catch up. Bring along a copy of your drawings for me. And don’t forget to sign them.”

Sound ridiculous? But that’s the same thing the waitress was asking me to do. What makes it OK with a book but not with design drawings?

As I said, I’m a businessman. I design orthopedic braces. I’m paid well to do that. I stopped doing that the last two years to write this book. Decades before that, I spent two years getting the story. OK, I was in prison at the time, so don’t count that. But in the late ‘90s I spent a year traveling around the Midwest conducting interviews and writing an early draft. Since then, I’ve paid editors for revisions, a graphic artist for the cover, and others to format the e-book and paperback.

So, that’s three years of time and thousands of dollars and now I’m supposed to buy the book, sign it, and give it to her—for free! Amazingly, she didn’t even think she was out of line. More amazingly, neither did I. Her request was socially acceptable.

So I ask my fellow authors—now that I am one—what’s going on around here? Isn’t a writer’s work product worth anything? Perhaps this thinking comes from the old days when publishers paid advances on royalties and gave authors a few copies to give away, but in these e-times when the big six are dying and indie is what’s left, I’m guessing writers will need to become more businesslike or there’ll be a new twist to an old saying.

In academia it’s publish or perish; in writing it’ll be publish and perish.

Thank you for reading my blog. I hope you visit often. Tom Henry: Confession of a Killer, is now available as an e-book on Amazon. Paperback, Special Edition Hardcover, and audio-books are coming.

2 thoughts on “The Business of Writing”